deX could be power source game-changer

deX could be power source game-changer

Footscray-based solar energy business MIL-Solar has welcomed the pilot program for a decentralised energy exchange in Australia – and is keen to be involved with its new Eclipse smart grid inverter.

The deX is a digital marketplace where distributed energy can be bought and sold by businesses, households, communities and utilities.

MIL-Solar chief executive Geoff Lowe said their Australian-designed and made Eclipse smart inverter with its in-built MyPower home monitoring and control software would enable deX energy exchange for home rooftop solar. Homeowners who install the high-end Eclipse inverter will have the long-awaited opportunity to buy and sell their power to others on the grid.

“This is the first time that industry has come together in this way,” said Dr Blythe. “An opportunity born from our current energy crisis, deX provides a framework to increase customer value, improve system reliability and manage the transition to a renewable energy supply.”

The pilot will take place across two network locations (United Energy in the Mornington Peninsula and ActewAGL in Canberra) and seeks to test the ability of deX to meet peak demand issues, and demonstrate how market-integrated batteries might address grid constraints.

ARENA says the rise of home solar power, batteries, and other local sources of energy generation has made Australia’s energy market one in which millions of smaller generators can provide their own energy, store it, trade it with others or send it back into the grid.[/vc_column_text][/vc_column][/vc_row] 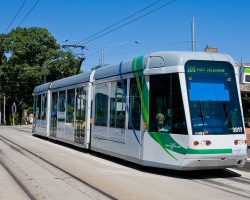 Solar power for trams on track